History of Science Seminar
Ḥunayn b. Isḥāq: A Translator of Galen’s Works or One of his Critical Interlocutors?​​
by: Pr. George SALIBA
Director of the Farouk Jabre Center
A.U.B. (American University of Beirut)
Webinar May 12 (2021-05-12, 6pm) 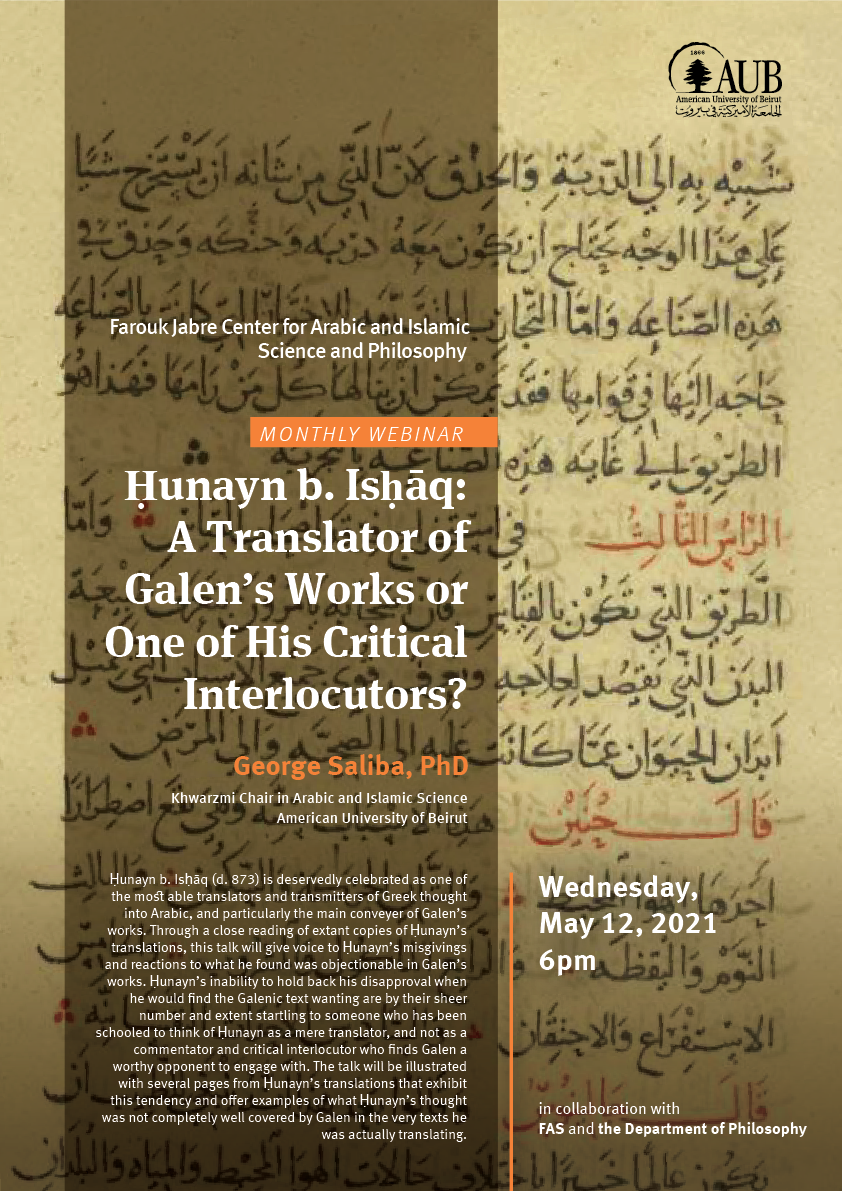 The Farouk Jabre Center for Arabic and Islamic Science and Philosophy at the American University of Beirut is pleased to invite you to a webinar on “Ḥunayn b. Isḥāq: A Translator of Galen’s Works or One of his Critical Interlocutors?”
by George Saliba, Kwarizmi Chair of Arabic and Islamic Science, Department of History, AUB.
For further information please visit the webpage

Please, register in advance for this meeting: here
After registering, you will receive a confirmation email containing information about joining the meeting.

Ḥunayn b. Isḥāq: A Translator of Galen’s Works or One of his Critical Interlocutors?​​
George Saliba, Ph.D.​
Khwarzmi Chair in Arabic and Islamic Science
American University of Beirut
​Ḥunayn b. Isḥāq (d. 873) is deservedly celebrated as one of the most able translators and transmitters of Greek thought into Arabic, and particularly the main conveyer of Galen's works. Through a close reading of extant copies of Ḥunayn's translations, this talk will give voice to Ḥunayn's misgivings and reactions to what he found was objectionable in Galen's works. Ḥunayn's inability to hold back his disapproval when he would find the Galenic text wanting are by their sheer number and extent startling to someone who has been schooled to think of Ḥunayn as a mere translator, and not as a commentator and critical interlocutor who finds Galen a worthy opponent to engage with. The talk will be illustrated with several pages from Ḥunayn's translations that exhibit this tendency and offer examples of what Ḥunayn's thought was not completely well covered by Galen in the very texts he was actually translating.

George Saliba is the Founding Director of the Farouk Jabre Center for Arabic & Islamic Science and Philosophy and holder of the Khwarizmi Chair in Arabic and Islamic science, in the History department at the American University of Beirut.
He is Professor Emeritus at Columbia University (NY). He has authored and coauthored more than twelve books and published close to 200 articles in refereed academic journals. He has delivered public lectures at academic venues on all four continents.
He is internationally recognized and has won many awards and prizes including the chair of Distinguished Senior Scholar at the Kluge Center of the Library of Congress and was a Carnegie Scholar (2009-2010).
Among his relatively recent publications include Islamic Science and the Making of the European Renaissance, MIT Press, 2007, (Pbk 2011), and Ma'ālim al-aṣāla wa-l-ibdā' fī al-shurūḥ wa-l-ta'ālīq al-'ilmiyya al-muta'akhkhira. A'māl Shams al-Dīn al-Khafrī (956 h./1550 m.), al-Furqan, London, 2015. His most recent article is “Knowledge of Arabic at Padua and its Reflection in Vesalius' Works," Mélanges de l'Université Saint-Joseph 68, (2019-2020), p. 21-57.​